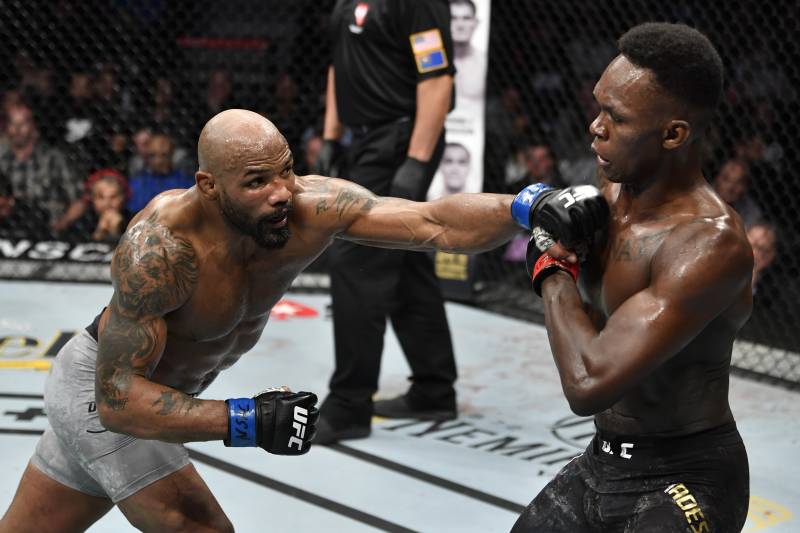 The 42-year-old Cuban slugger took the fight to Adesanya and landed the heavier blows in a fight that the crowd thought lacked much action.

According to UFC statistics, from the perspective of the judges, however, Romero did not land enough punches as Adesanya survived and advanced via a 48-47, 48-47 and 49-46 unanimous decision in his first title defence, even though the Cuban stated that the victory was his.

Speaking after the fight, Romero, who could not hide his feelings stated: “I wanted him to stand and trade with me but he was scared to fight.

He continued: “The people came here for a real fight and not for this. The people spent their money to see a real fight. That’s why I come here because I know the people pay and walk around and pay pay-per-view for what? Nothing.”

In the course of the fight, the threat of Romero’s explosive counter strikes frustrated Adesanya and got him off his game, as Romero seemed like he was having a good time in the ring.

Adesanya, who holds a record of 19-0 was landed constant jabs and leg strikes which caused multiple welts on Romero’s lead leg. The 30-year-old Nigerian capitalized on this to steal the win.

The Lagos-born kickboxer, after the bout, stated: “It was a hard fight but I did what I had to do,” Adesanya said.

The story leading into the bout was that Adesanya could have waited for top contender Paulo Costa to return from biceps surgery. He, however, chose to face Romero, because of his reputation as one of the toughest men in the UFC, despite entering the fight on a two-fight losing streak.

Leading into the bout, Adesanya had been touted by UFC fans in various quarters to be on the verge of becoming one of the sport’s big stars. His victory on Saturday night, however, confirmed these thoughts.

The Nigerian-born Kiwi has won all of his eight UFC fights while Romero has lost three straight. The 42-year-old Cuba native has not won a fight since 2018.

Adesanya raced to an 8-0 victory record in 755 days; the fastest in modern UFC history. The eight-fight winning streak is the longest active winning streak at middleweight and tied for the third-longest in the division’s history.

Following the fight with Romero, Adesanya made a disclosed guarantee of $500,000 for the fight, while the Cuban made at least $300,000, according to the Nevada State Athletic Commission (NSAC).