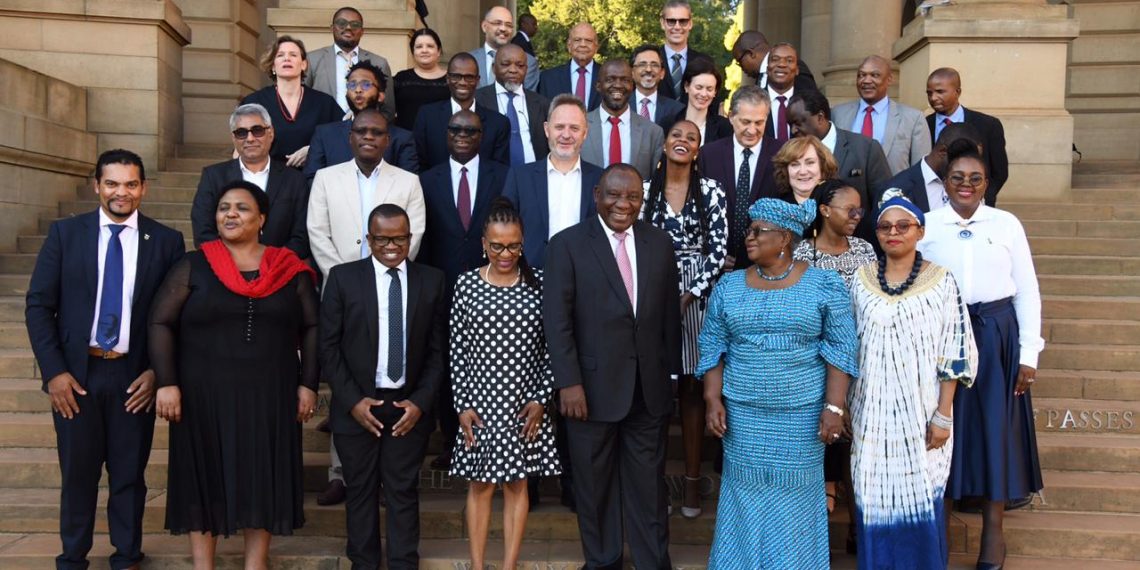 Nigeria’s former Minister of Finance, Dr Ngozi Okonjo-Iweala, has been appointed by South African President, Cyril Ramaphosa, as a member of the country’s Economic Advisory Council.

Why Atiku, Okowa Should Not Contest 2023 Election – Omo-Agege

Making her appointment public via Twitter on Saturday, Okonjo-Iweala, shared pictures which she captioned: “With President Ramaphosa, members of cabinet, and members of the Presidential Economic Advisory Council in Pretoria discussing sources of growth for the South African economy and win-win economic interactions with the continent.”

Findings revealed that the council is saddled with the responsibility to ensure greater coherence and consistency in the implementation of economic policy for the Rainbow Nation.

It was further gathered that the council would ensure that the South Africa government and the citizenry are better equipped to respond to changing economic circumstances, while also initiating the development and implementation of economic policies that will ensure inclusive growth.

Okonjo-Iweala’s appointment is coming at a time when the South African economy is taking a nose-dive after the country plunged into recession for the second time in 24 months and is in need of quick intervention.

Meanwhile, the Vice Presidential Candidate of the Peoples Democratic Party, PDP, in the 2019 general election, Peter Obi, has described the choice of Okonjo-Iweala as deserving and highly rewarding following her antecedent while she was Nigeria’s Minister of Finance.

While showering encomium on the Delta State-born economist and international development expert, Obi lamented the opposition she faced in the hands of the Nigeria Governors forum while trying to tow Nigeria’s economy in the right path.

He recalled that her effort for the country to save the huge sum in excess crude account in the Sovereign Wealth Fund for the future hit the brick wall; a problem that is currently rocking Nigeria’s economy.

The former Anambra State Governor stated: “She was vehemently opposed and the Forum even went to court to force her to share the money.

“We called her names then, but look at the deteriorating situation we found ourselves today.”

In his congratulatory message to the 65-year-old Havard University graduate, Obi described Okonjo-Iweala as an exceptional personality and first-class ambassador of Nigeria and one whose obligation to a better society remains outstanding.

It is believed, however, that the expertise of the mother of four who served during the administrations of former Presidents, Olusegun Obasanjo and Goodluck Jonathan, would turn the fortunes of South Africa around.

Why Atiku, Okowa Should Not Contest 2023 Election – Omo-Agege